“Why should U.S. taxpayers be interested in Ukraine?” – Tillerson 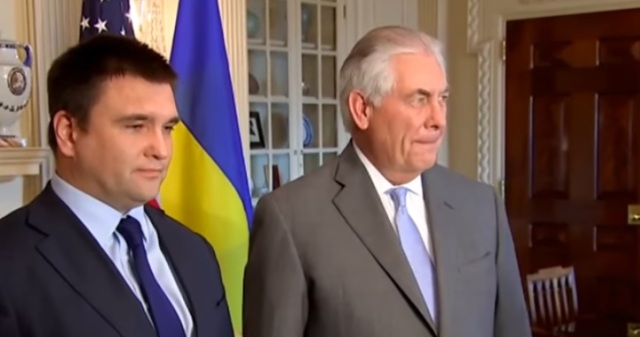 Earlier this month Rex Tillerson, the Secretary of State said “Why should U.S. taxpayers be interested in Ukraine?” Tillerson claims that his comment was rhetorical in nature and not, as others had believed, the policy position of the chief diplomat of the United States.  Nevertheless, I think that his question, rhetorical or not, does indeed raise an interesting concern, why should America care about Ukraine?

The United States should care about the Ukrainian conflict and the annexation of Crimea because it represents the manifestation of the Kremlin’s efforts to undermine and weaken the western led international order.  Russia’s actions in Ukraine are the pinnacle of its active measures campaign against the West.  Russia not only attacked and annexed portions of Ukraine but it also attacked the fundamental principles of sovereignty, US credibility, and international law.

When countries violate fundamental principles of international relations without repercussions, countries become less likely to resolve their disputes through international institutions like the WTO or the UN.  If the most powerful and influential countries do not enforce international law, then an increasing number of countries will resolve their concerns over security and trade in a unilateral manner.  Furthermore, the less a country faces repercussions due to its unilateral actions the more likely they are to continue their resort to such behaviors.

Unilateral actions void of repercussions tend to lead to security dilemmas and 0-sum perspectives regarding international affairs.  Such an international environment means that countries will leave free trade agreements, enact protectionist economic policies, build their militaries and become increasingly hostile towards one another.  For example, in light of the ‘Brexit’ vote, military and political pressures are increasing between the peaceful countries of Spain and England.  In the absence of the EU to help regulate sovereignty concerns over the UK’s Gibraltar territory located on the tip of southern Spain, pressures are rising in the region as these countries attempt to settle their dispute on a bi-lateral basis without the help of international organizations.

The implications of Russia violating Ukraine’s sovereignty are massive.  It is an existential threat to the longevity and integrity of the international order.  Sovereignty is not a privilege for the strong, it is a right for every country, regardless of their size and power.  As time goes by and countries neglect to uphold the standards and laws of the international order, it will unwind and dissolve into classic world orders such as the ”balance of power’ model where international relations are governed by power and strength and not by international law or sovereignty.  It is likely that China, Brazil, India, South Africa, and Russia will start to take unilateral actions to achieve their goals if the international order is not protected.

The more frequently the United States fails to live up to its international commitments such as the Budapest Memorandum which was supposed to protect Ukraine’s sovereignty, then an increasing number of countries will take advantage of the system’s weaknesses to further their own national interests at the cost of the system as a whole.

1 Response to “Why should U.S. taxpayers be interested in Ukraine?” – Tillerson